in clover: getting unstuck

I've been stuck in a bit of a rut lately.  It's ok, happens to the best of us. And being stuck in a rut is not all bad.  Sometimes, it is helpful to be in a "rut."  Sometimes, we just need to get where we need to go without having to think much about it.  But other times, we need to break out of the rut.

I felt ready to be unstuck so I started moving things around. When I get stuck, it's the first thing I do.  I move things around in my physical environment.  Things I all ready have.  You'd be surprised by the difference that can be made, just by rearranging things a bit.  I moved things around inside the house last week.   Still stuck.  So I went outside....

The first thing I moved was this succulent I had planted in the wall pocket that hangs on the gate to the chicken courtyard.  I'd never felt quite satisfied with the way it looked.  Out of balance.  Not terrible but not quite right, either. 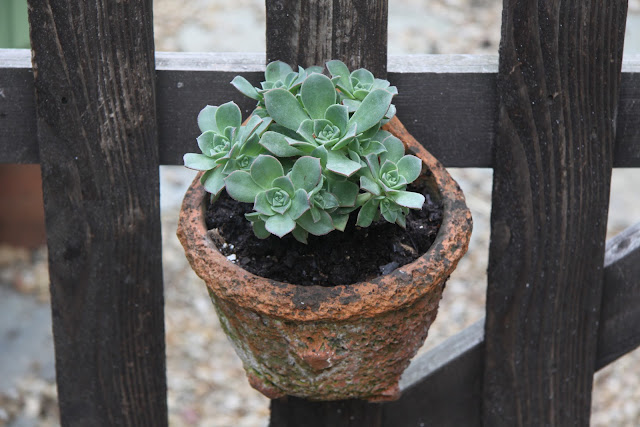 I replaced it with this little guy which I think IS just right. 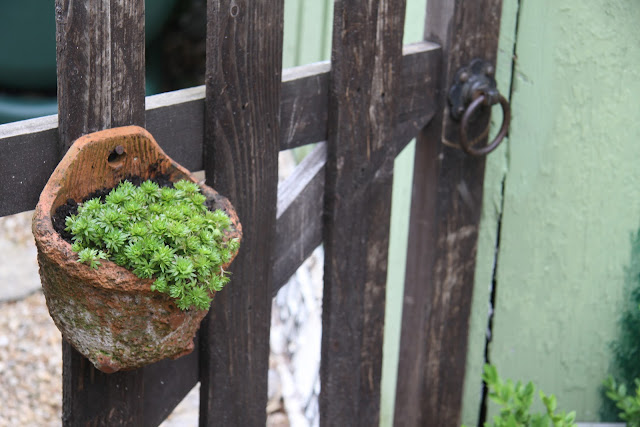 ﻿
Remember my post  about sacred brokenness?  Well, as is often the case, I have been given an opportunity to practice what I preach.  These are the window boxes by my back door last summer. 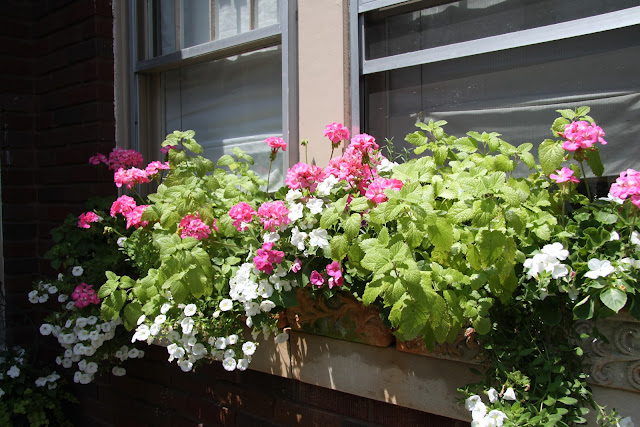 I have had these planters as long as I have lived in this house.  Every year I congratulate myself on my good luck at finding pretty, reasonably priced, long lasting pottery planters that JUST FIT my concrete window ledges like they were custom made!
This year I lined the planters up on the ground for a new planting…all six in a row... 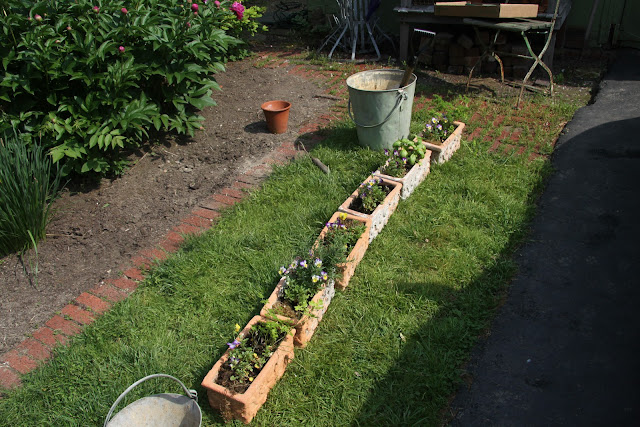 I added compost and plants to the six boxes and fit them snugly together on the ledge.  One, two, three, four, five... 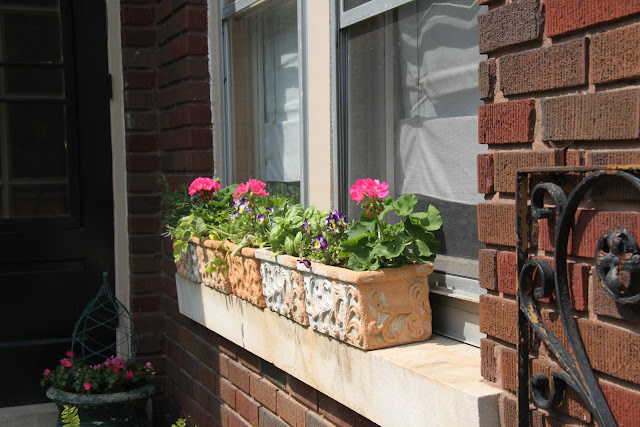 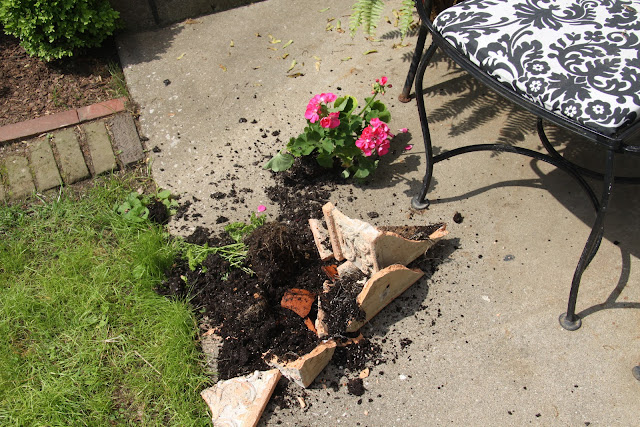 I don’t know what happened.  It simply slipped from my hand.  Smashed on the concrete.   Can't be mended.
I was home alone and I could have cursed at the top of my lungs but I remembered that post about sacred brokenness.  So I allowed myself one quick, angry lap around the garden, fists clinched, and then I took a deep breath because there’s no sense crying over spilled milk or broken window boxes.
As I gathered the broken pieces, I realized they were too pretty to throw away.  To honor the lovely brokenness of the pottery, I placed the bits here, in this flower bed.  For the past few years, this has been my herb garden but in the spirit of moving things around I decided to move the herbs and  throw down about a zillion zinnia seeds here, among the instantly gratifying but quite expensive (compared to seeds) zinnia plants I bought at Wilson’s. Once things start to grow, I'll move the broken bits around again. 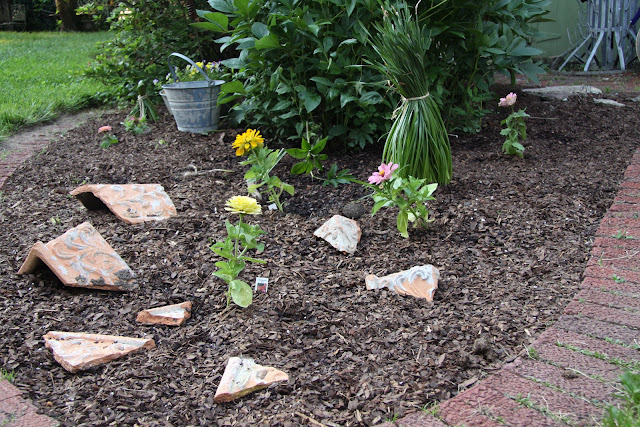 I spread out the five remaining boxes until the space on the ledge was evenly filled.  I thought to myself, “its kind of ZEN to leave a little blank space between the planters….like the beads of silence interspersed on my prayer bracelet.” 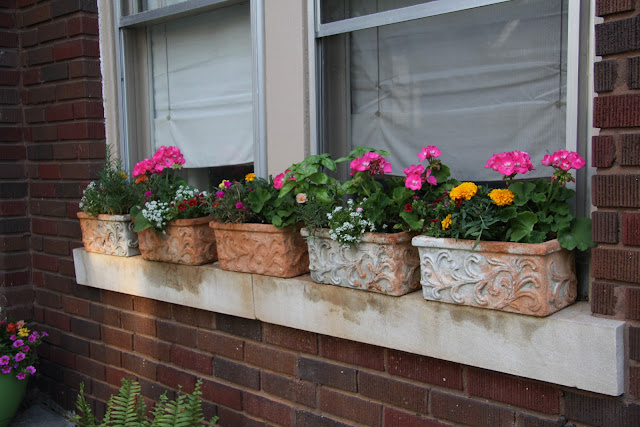 After much reflection, I think I actually like them better this way.
I’ve also changed the plantings in the window boxes themselves this year.  I’ve mixed up my  color scheme…throwing in some red, orange and yellow by adding basil, rosemary, Tequila mix rose moss, red calibrachoa  and giant Antigua Orange marigolds to my usual pink geraniums, asparagus fern and sweet alyssum.  I also swapped out the planters that sit on the steps under the window boxes.  I moved the very traditional dark green concrete planters filled with Lipstick Impatiens to the front steps. 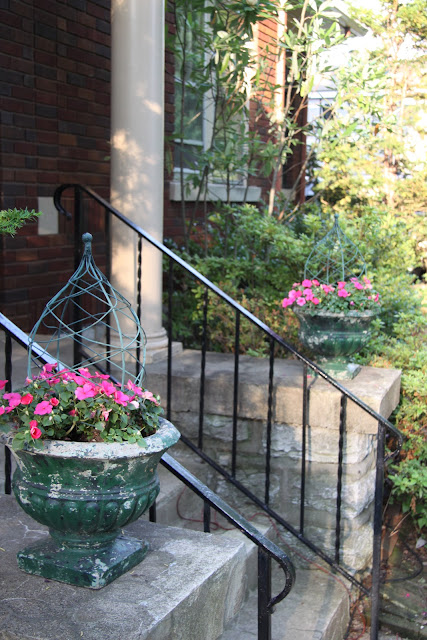 I replaced them with more contemporary plastic moss green urns and repeated the same plants.  (Got the urns at Target…a bargain at under $7 each!)  I've never had plastic urns before but I was drawn to the color and simple lines of these.  I looked at them at least a dozen times before I gave in and put them in the cart. 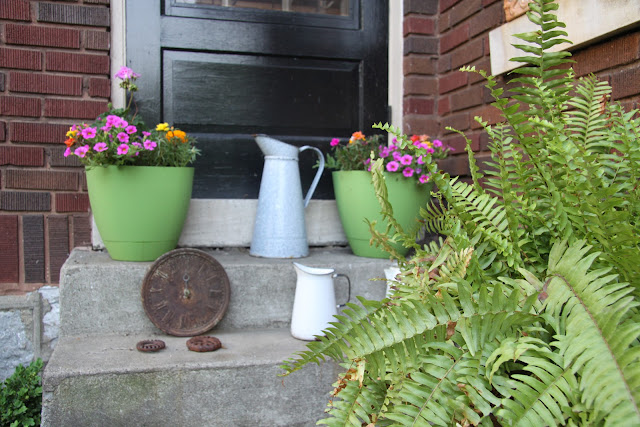 For a finishing touch, I swapped a (mildewed) khaki and black chaise lounge cushion for a bright green one.   (Home Depot - $19.99)  There is a lot of vibrant color in this corner now and I really like it. 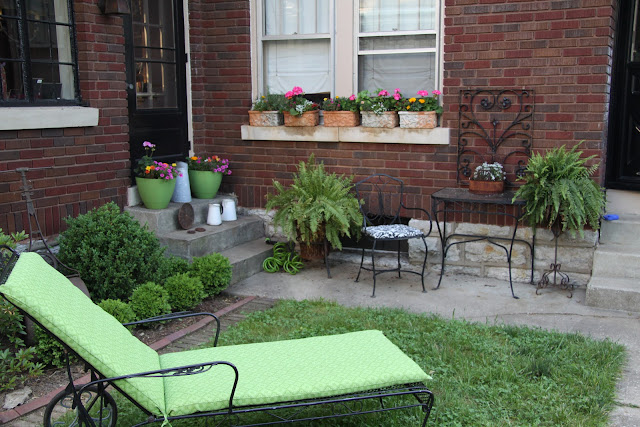 I also made one more big change.  I did something I don't think I have EVER done before.  I bought some plastic chairs. It's not that I have anything against plastic...it's just that plastic, by it's very nature, cannot be rusty or have peely paint...traits that make my heart beat faster.
Out front, I have these lovely handmade wooden Adirondacks (a gift from a sweet friend). And I LOVE them. 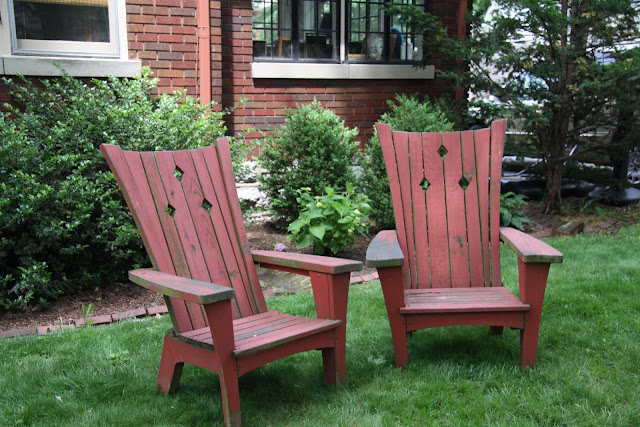 But I went with plastic for the back garden. They will dry quickly after a rain or a squirt from a garden hose. ﻿ They are lightweight and very easy to move off the grass.  Big C sometimes mows around the heavy wooden chairs which doesn't make me very happy.

I like to move the chairs around to the ever elusive shady spot in the afternoon.  These are maintenance free, inexpensive ($16 on sale at Target) and come in very pretty colors these days.  I can't imagine I would ever want ALL plastic furniture, no matter how convenient or practical, but I am definitely enjoying these two chairs. 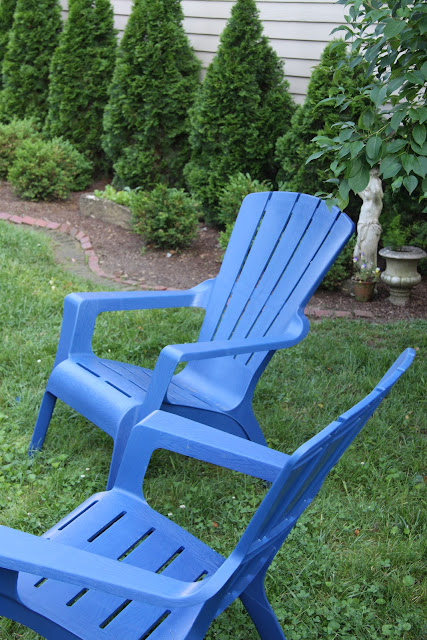 I chose blue to pick up the blue roof on little c's house... 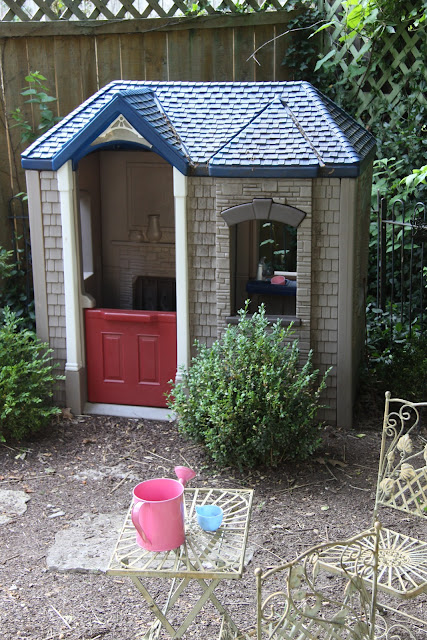 which, yikes, I just remembered is also made of plastic!  The little house was a gift to her on her 3rd birthday.  At the time, it was a choice between the cutest plastic house I could find or no house at all, despite the elaborate plans I had drawn for a custom made playhouse named Foxglove Cottage﻿.

I've decided to crown myself Queen of Good Enough and just get on with life!  This house with the blue roof was definitely Good Enough and little c and half the kids in the neighborhood love playing in it, plastic or not.

The blue also shows up in this bistro table... 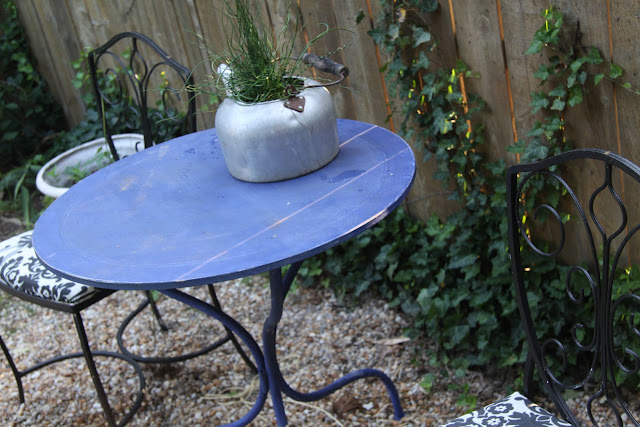 And in my broken blue vintage French seltzer bottle... 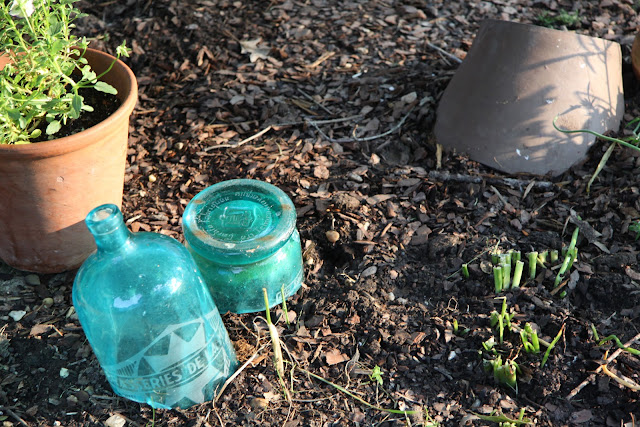 I think I moved myself right out of that rut.