in clover: Suffering and Succulents

“Things falling apart is a kind of testing and also a kind of healing. We think that the point is to pass the test or to overcome the problem, but the truth is that things don’t really get solved. They come together and they fall apart. Then they come together again and fall apart again. It’s just like that. The healing comes from letting there be room for all of this to happen: room for grief, for relief, for misery, for joy.”
Pema Chodron

Maybe you saw that quote on the in clover Facebook page.  I love Pema’s words .  I tend to think in a linear fashion but lately I’ve been trying to remember that all things, including my emotions, are more cyclical than linear.   Enlightened though we may become, we will never avoid suffering.   As Pema said, avoiding or eliminating suffering is not the point.  The point, I think, is to remember to look for and to find the healing in the suffering, as well as the joy.  I do believe that all of it, the weeping as well as the laughter, brings potential for healing….the happiness and the sorrow, the joy and the despair, the consolation and the desolation….it’s all sacred.
The past few weeks I have found myself in a bit of a downer. I thought about telling you I was feeling blue but blue isn’t really the word for it…it’s deeper than that.  I’ve been fighting to remind myself that there is healing here in the dark places…I’ve done my best to hold that knowledge in a tight embrace and to stay present to my feelings.
Today I had a long “to do” list…my top priority was to buy groceries.  But I felt really, really bad.  Odds were I would return home from the grocery with carton of Twinkies and a case of liquor.  I didn’t want to eat my way into oblivion nor drink my way there and I don’t take anti-depressants anymore…the best thing I knew to do was to take myself out in the sunshine to dig in the dirt.  So I drove past the grocery store on my way to the gardening center.


Recently I saw photos of a beautiful container arrangement of succulents in a rustic, stone-like container. I have never planted succulents (frankly, I thought they were ugly) but for some reason, I seemed to have found a new appreciation for them.  And maybe, I thought, if we have a drought like last year they would have a better chance of survival.   I filed the image away under “someday” cross referenced with “maybe.”
In my garden I have a small, round stone trough I purchased in France.  I was in Europe on a buying trip.  I had crossed the channel from England to Normandy overnight on a large ferry. 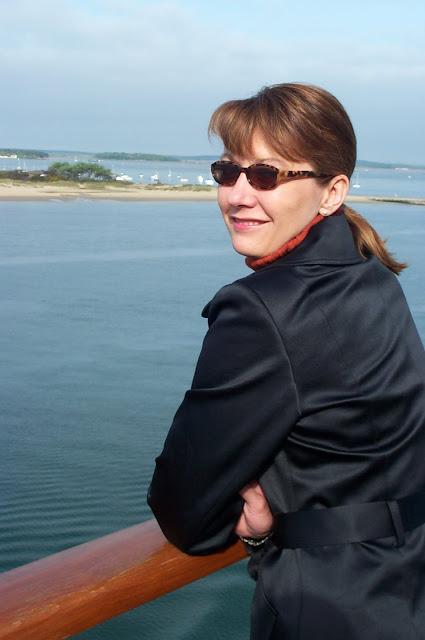 I had a private sleeping compartment but was too excited to sleep so the French side of the channel found me bleary eyed and in need of some strong French café.  Once properly fortified, my friend Graham and I set out to conquer the Norman countryside in his van.   At our very first stop, I spotted two of these small stone troughs just outside the door of the brocante.   Stone troughs are pretty common but not small round ones.  I knew I wanted them as soon as I saw them. “Graham!”  I hissed under my breath, “Find out how much!”  Following a rapid exchange with the shop keeper (in French), the deal was struck.  As we placed our export sticker on the troughs, the shop keeper said something else in French.

Now, I took high school french but I didn’t retain much of it, and I really depended on Graham to translate for me, especially numbers.  But with each visit, I found I could understand a little more.  This time my brain locked in on “pour les poulets.”   Graham turned to me in order to translate but I shushed him.   With great pleasure, I shouted, “It’s FOR THE CHICKENS, right?”   I assumed this little trough had been used for chicken feed but I found out later it was a waterer “pour les poulets.” 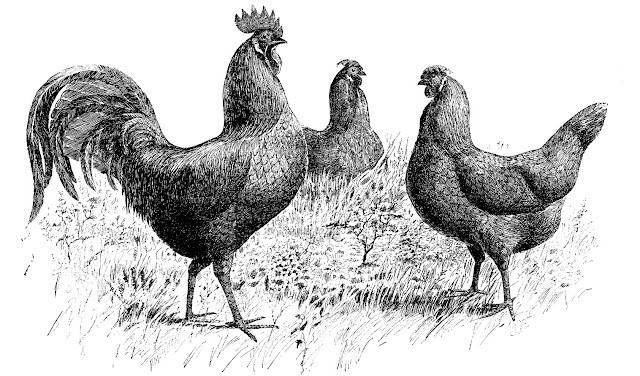 I thought about using it to water my own hens but it’s really quite heavy and fairly impractical for that use.  Several years ago I asked Michael to drill a drainage hole in the bottom and since that time it’s kept company with two small staddle stones by little c’s playhouse. 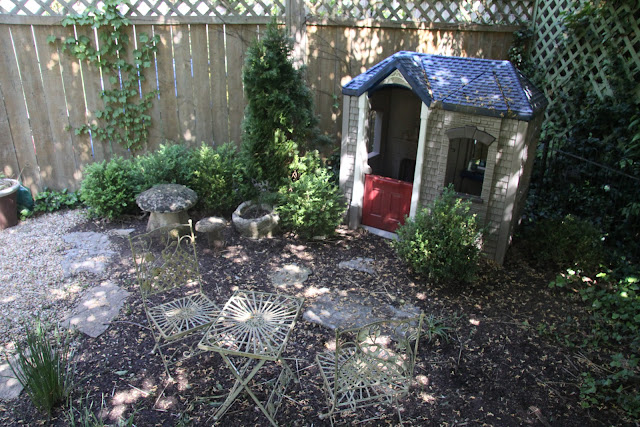 This year I decided to move it to a sunny, hot part of the garden that needs a little somethin’ somethin’. 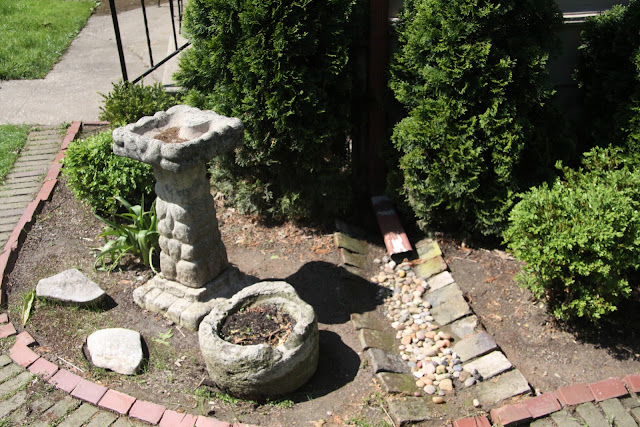 In honor of the troughs heritage,  I thought some Hen and Chicks would be good (get it?) along with other succulents.
I don’t know much about succulents.  I tried to choose a pleasing variety. I thought I had too many plants but actually, I think I need at least two more.  I took photos of each and made a numbered list of the names so that I can research them a little more.  I removed the soil left in the trough from last year and mixed it 50-50 with compost (my own).

This part of my garden washes out if we have a hard rain.  I quit planting here and just put down a nice mulch but now I’m a little tired of the mulch washing away.  Nothing has done very well here so maybe this trough of succulents will be just the ticket.  It’s not going to float away, that’s for sure.  We planted new grass seed this year and plenty fell in the planting bed.  I used a vintage English gooseneck trow to take up the grass sprouts. 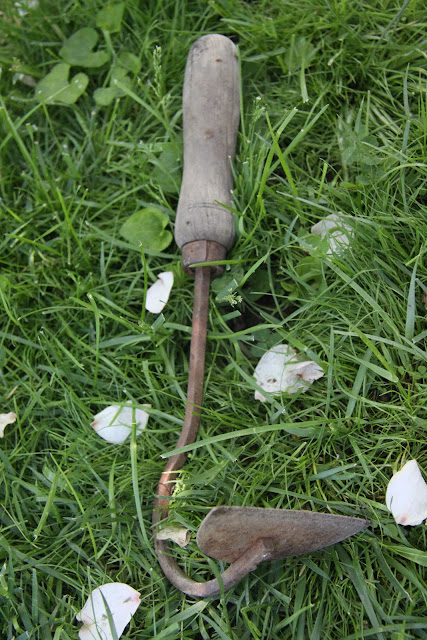 I then put down Concern brand pre-emergent.  This is made from corn gluten and is not bad for the environment.  Two years I switched from using Preen brand to Concern. 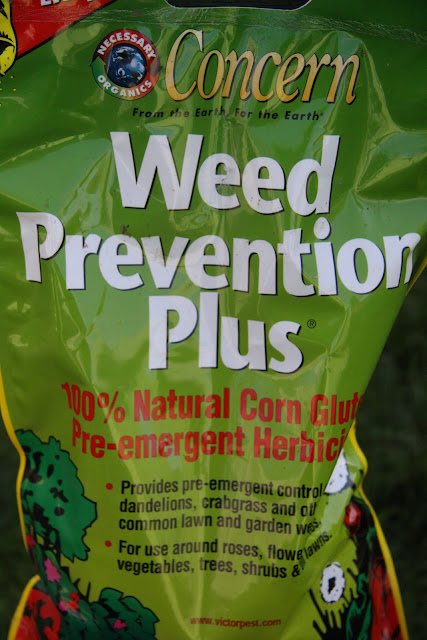 When I have time this weekend I will put down some new mulch and I think this will look really nice. 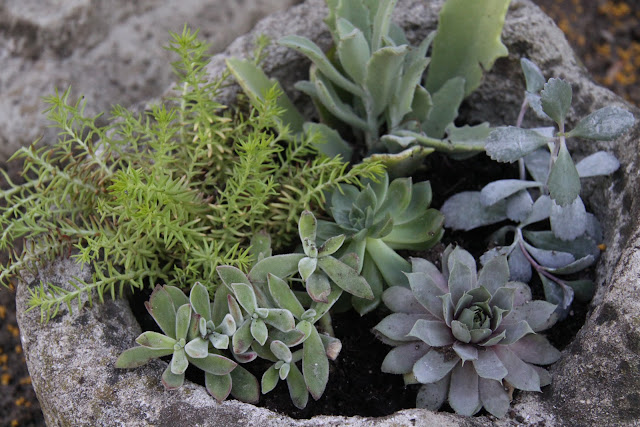 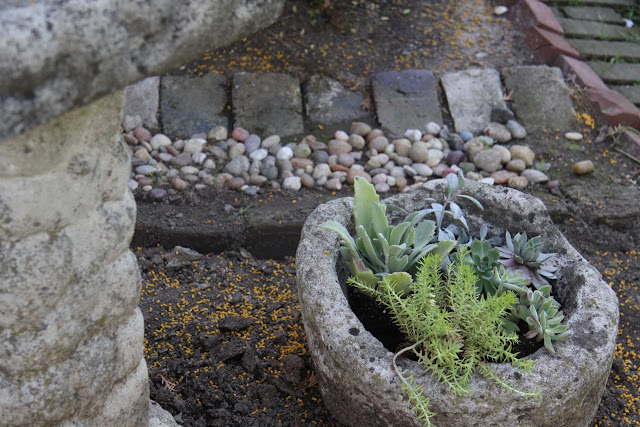 I could have waited to show it to you until it was “perfect” but that’s not really what I want in clover to be about.  Nothing is perfect, everything is a process. Some things work, some things don’t.  It would be easy to show you only the happy times…only the successes….only the perfection but I think we have too much of that particular illusion in our world already.  In clover, we’ll share the beauty of things falling apart as well as coming together.  Let’s leave ourselves a little room, just like Pema said.