in clover: a volunteer in the garden

Last spring, Michael and I added a long, narrow raised garden bed along the unused (and weedy) strip between our black top driveway and our neighbors privacy fence.  Michael picked up a truckload of compost from a reputable company and I looked forward to planting neat rows of tomatoes, cucumbers and squash in our newly claimed space.  When it arrived, it smelled terrible!  I called the company to be sure we had purchased seasoned compost and the woman on the other end of the phone assured me that we had.  I'm sure she believed it was ready but in reality, it was not.

This is an excerpt from a blog post I wrote in June of last year:

... Unfortunately, in six weeks time there has been very little growth and blooms wither almost immediately, instead of setting fruit. I don't think we were intentionally given hot compost but I do think we got soil that was not ready for use.  Next time I will listen to my inner voice and trust my instincts.

Now that the compost has had a year to cure, I have no qualms about planting in the raised beds this year.  But before I could make even a hurried trip to the gardening center to pick up tomatoes and cucs, I noticed something was all ready growing.  I was tempted to pluck out the "weed" but instead, I left it alone.  Before long I could see that this was not a weed.  Before long, the plant looked like this: 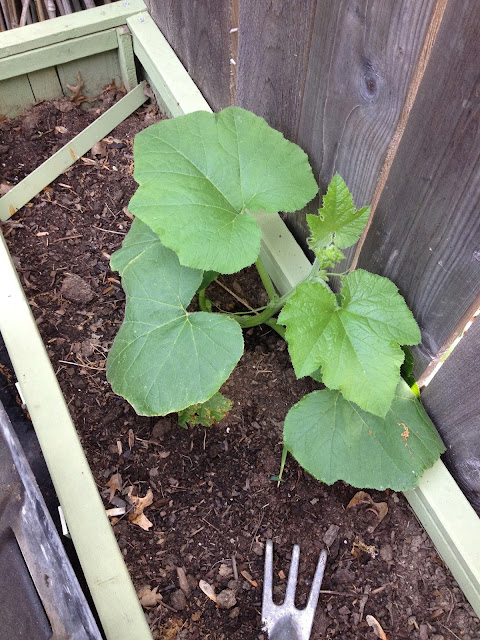 I texted the photo to a knowledgeable veggie growing friend..."Is this a zucchini?"  I asked.  "Not sure.  Definitely some sort of squash" came the reply text.

In gardening and botanical terminology, a volunteer is a plant that grows on its own, rather than being deliberately planted by a farmer or gardener. Volunteers often grow from seeds that float in on the wind, are dropped by birds, or are inadvertently mixed into compost. Unlike weeds, which are unwanted plants, a volunteer may be encouraged once it appears, being watered, fertilized, or otherwise cared for. (Wikipedia).

I watched this squash vine grow and grow and grow with no attention from me...it's by far the largest and healthiest looking plant in my garden.  Today it looks like this: 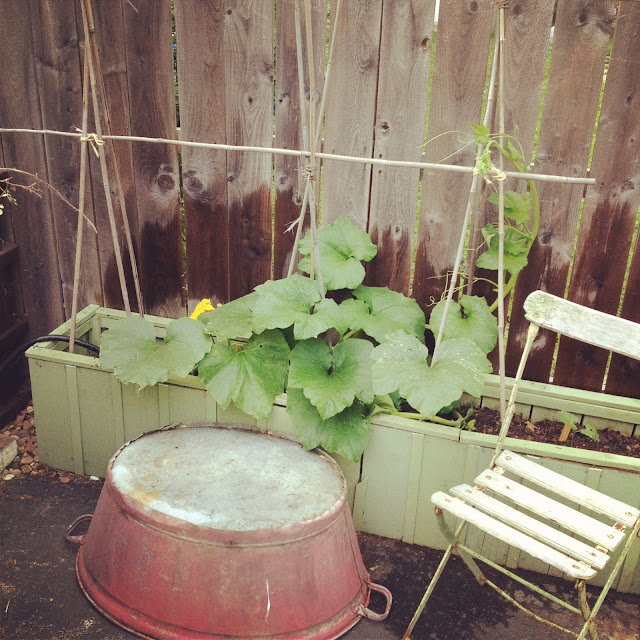 I never intended on growing a sprawling squash of any sort in the raised bed. It really needs somewhere to grow.  Yesterday I constructed a makeshift bamboo trellis.   The curly tendrils of the plant have all ready latched on to the bamboo overnight... 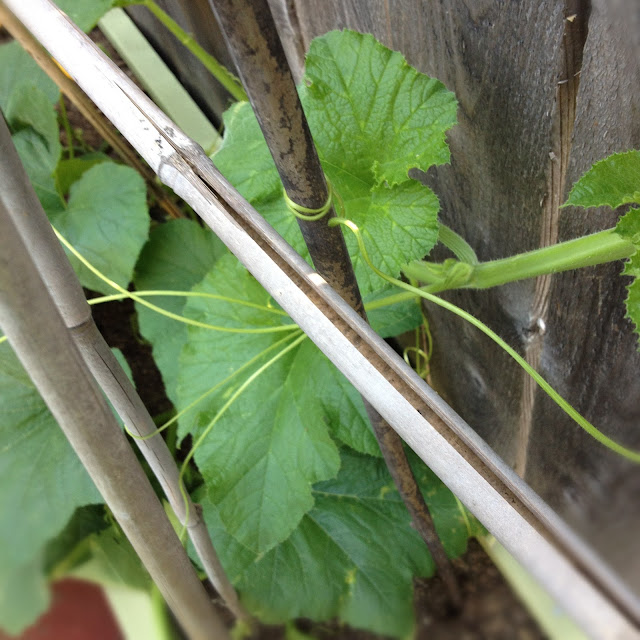 And this morning I was greeted by these gorgeous blooms... 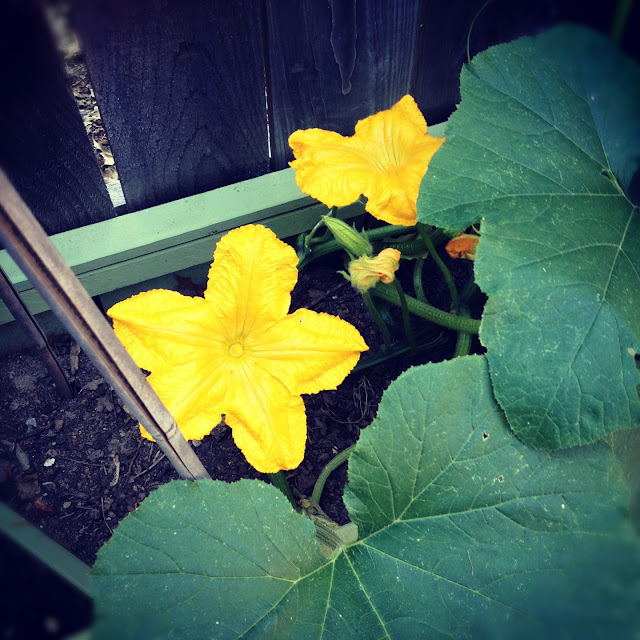 I am still not sure what kind of squash this is...the most reliable way I can think of to know is to simply wait and see.

In the early spring months, I begin planning my garden.  I start with pencil and paper.  I sketch diagrams and make lists. I consult experts. I make every effort to get the right plant in the right spot.  And I tend to choose plants I have grown before. Less room for error.

I also tend to approach life in this same way.  Lots of planning and list making and sticking to what I know.

Last weekend, I completed my second year of training as a spiritual director with Sycamore Spirituality Center.  By this time next year, I will "be" a spiritual director.  A few days ago someone asked me how I got started in spiritual direction.  It's a long and meandering story...full of unexpected turns and lots of synchronicity.

At the time, I had plotted and planned to enter seminary.  I was ready to train for a new vocation and I definitely felt a call.  I didn't want to preach because public speaking of any sort made me sick to my stomach.  But I hoped I could serve a church in other ways...or hospital chaplain seemed like it would be a good fit. I was enjoying my volunteer work at UK Children's Hospital.

I applied and was accepted and began breaking the news to friends and family.  But by the time I was actually ready to begin, I was no longer sure I was on the right path. Finally I confided in a friend who is also a minister.  I remember what I tearfully asked her.  "What else can I do?  If I know God is making a call on my life and I don't believe it includes the seminary path, what do I do? I really don't know.  Do other paths even exist???"

She asked, "Have you considered spiritual direction?"

My reaction to her words was pretty much the same as my reaction when I first discovered the mystery squash growing in the garden this spring.

"What the hell is that?"

A volunteer grows on it's own rather than being deliberately planted...often grows from seeds that float on the wind...

As I approach the end of my training, my questioning mind has bombarded me with questions about the future...will anyone consider spiritual direction to be "real" work?  Will anyone actually want me to be their spiritual director?  Will I work with directees one on one? Or will I do group work? Or both?  Where? And how will I get started?  Will I earn enough to help with Big C's college expenses?

I've tried to tackle these questions with a pen and a notebook....I've consulted experts....sketched diagrams and made lists.  I've plotted and I've planned.

But finally I've decided (for the moment, at least) that like the mystery squash in the garden,  I must simply wait and see what fruit this particular volunteer bears.  In the meanwhile I can only focus on tending the plant.

Mother Earth News says this about volunteer plant, which the writer calls "a garden bonus" :


Produce from volunteer plants is often bigger and tastier than are intentionally cultivated crops. After all, the plants have sprouted where they want to grow, as opposed to where you want them to.

That gives me hope.

Peace and all good,

I'm trying to get some sweet peas started.  At our first home we had a nice sweet pea patch.  A former owner put them in several years prior.  My neighbor told me she had done everything she could to kill them because she thought they made our fence line look "messy" but year after year they thankfully came back.

Two years running I have sowed seed from those very sweet peas but they did not come up. I also sowed store bought seeds last year in a pot...they did come up, quickly!  And just as quickly, they became a tasty snack for some sort of critter.  So I bought some sweet pea plants at the gardening center.  They grew and climbed but never bloomed.  I didn't have a really great garden year last year.

Lately, I have been reading a lot about the Sacred Feminine and I've had some lively discussions with other women.  We've been reading about the feminine qualities of God and we praying using words like Her and She.  We even tried the name Goddess on for size.  Most of us confessed to having trouble with that one.  I'm still sitting with how I feel about that.

But even in my discomfort...when I saw this variety of sweet pea seeds at a local nursery, how could I resist? 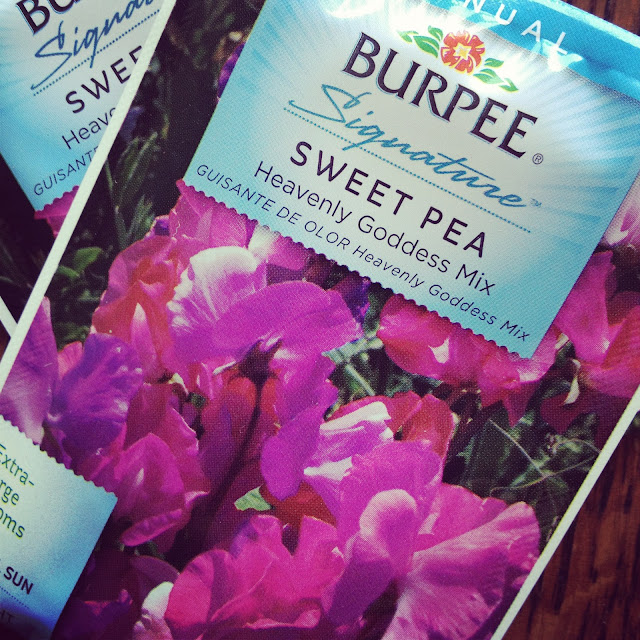 Clearly, I am no sweet pea growing expert so I followed the instructions on this site for planting.

I do have lots of good compost for planting the seeds, thanks to my hens, and I did nick the seed and I also soaked the seeds for a little while.  I'm hoping that these peas come up this year but they will or they won't. We shall see. 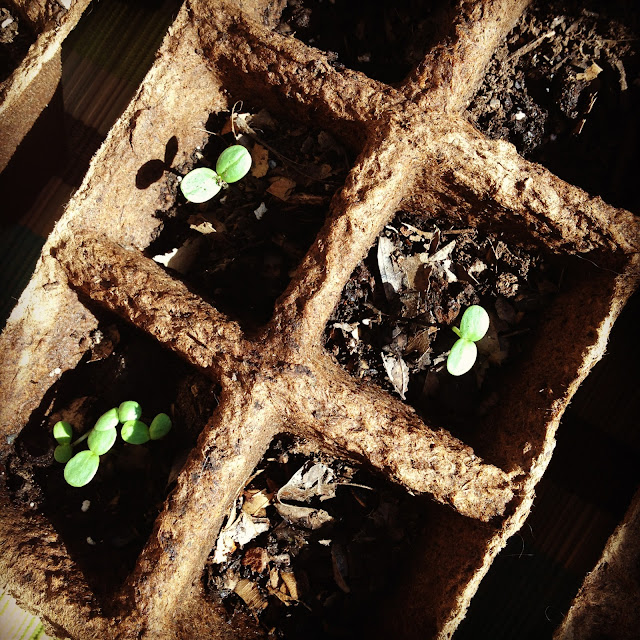 My friend Kera taught me how to start seedlings in egg shells!  I started these a few days ago.  When the transplants are ready to go in the ground, I can gently crush the eggshell and plant the whole thing. The egg shell will nourish the plant.  Genius! 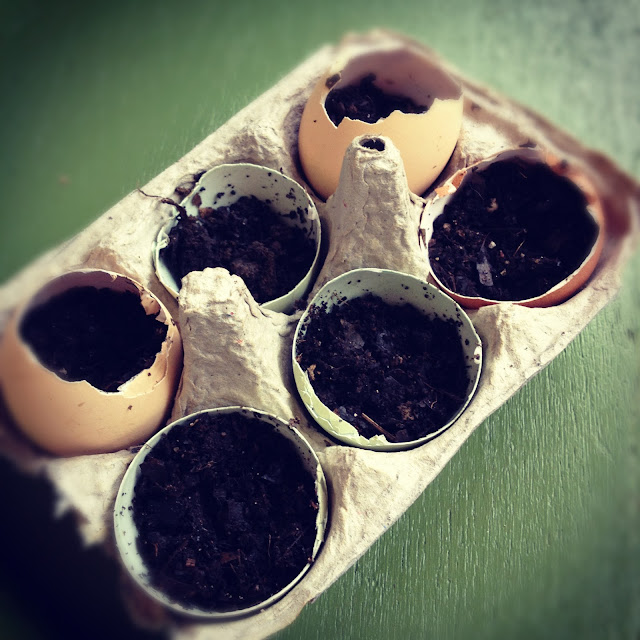 Sweet peas make wonderful old fashioned bouquets.  They are one of my favorite flowers and I sure hope that God will see Her way clear to grace my garden with these heavenly blooms, once again.

My ChristCare group, Cultivating Mindfulness, has been experimenting with labyrinth prayer.


In colloquial English, labyrinth is generally synonymous with maze, but many contemporary scholars observe a distinction between the two: maze refers to a complex branching (multicursal) puzzle with choices of path and direction; while a single-path (unicursal) labyrinth has only a single, non-branching path, which leads to the center. A labyrinth in this sense has an unambiguous route to the center and back and is not designed to be difficult to navigate.  (Wikipedia).

Writer Dan Johnston points out that “a labyrinth is a right brain task.  It involves intuition, creativity, imagery.”

There’s that word again....creativity! In the past, I considered the words labyrinth and maze to be synonymous. It’s so interesting to me...being mindful of the differences.

A labyrinth is a right brain task. It involves intuition, creativity, and imagery. With a maze many choices must be made and an active mind is needed to solve the problem of finding the center. With a labyrinth there is only one choice to be made. The choice is to enter or not. A more passive, receptive mindset is needed. The choice is whether or not to walk a spiritual path.
The only physical maze I have experienced is a corn maze. Every year, at least one is available to try at a farm fall festival around here.  Designed for young children,  it’s just my speed.  To be honest, with my sense of direction, just driving around my own town can often feel like a maze to me.

Puzzles frustrate me.  Michael and I are very different in that way.  He loves a Rubik’s cube and can spend hours with it, if need be.  Usually he's figured it out quite quickly.  Me?  Within five minutes I want to throw it out the window. I've never solved a Rubik's cube.

Mazes (and puzzles) are not my cup of tea.  But I have wanted to have a labyrinth experience for quite some time now.  And tonight, I walk the labyrinth for the first time in the company of these amazingly smart and unflinchingly brave women.

Please share any labyrinth experiences you have had in the comments section.  I’d love to hear what you think about labyrinth meditation.

Here’s one last quote from Johnston:

With a maze many choices must be made and an active mind is needed to solve the problem of finding the center.
With a labyrinth there is only one choice to be made. The choice is to enter or not. A more passive, receptive mindset is needed. The choice is whether or not to walk a spiritual path.

I have no idea what will happen tonight but I am excited to find out!

Suscribe by email below. You'll receive an email when a new post appears.