My grandfather grew more tomatoes than anyone I have ever known.  He never sold his but he sure did love to give them away.  When I took Michael "home" to Western Kentucky for the first time, my grandfather, in the early morning hours, left a love offering at our door...a large dirty box of freshly picked, just right ripe, homegrown tomatoes.  Michael pondered what we would do with so many tomatoes.  I showed him one way my grandfather had taught me to eat them.  We sliced the sun warmed fruit, layered the red, juicy slices on a platter, sprinkled them ever so slightly with salt, and ate them for breakfast.

Michael and I have shared many breakfasts, none quite so memorable as that one though. We both remember so well sharing those misshapen, dusted with garden soil, ripe, warm, red, juicy orbs. The day that began with that breakfast was the day we first told each other, "I love you."  Those tomatoes are a part of our shared sacred story...a seedleaf of the twining vine that is our relationship. Thank you, so much, Grandaddy.

This year, I planned to have many, many tomatoes but I encountered a soil problem (read about it here) so I got a late and meager harvest.

Still, by late summer, most days I could pick a few rlpe, red, pink, or yellow tomatoes.  My absolute favorite was named "Sweet Baby Girl," a cherry tomato I purchased from Wilson's Nursery (read about it here).  Not a single one of the sweet, small fruits this plant produced made it into our house.  They were so delicious, I polished them off on my shirt and ate them in the garden.

Not too long ago, I picked the last of my tomatoes.  Our weather has dipped into cold temps a few times.  Cold temperatures (whether on the vine in the garden or stored in the refridgerator) alters the taste of fresh tomatoes. The vines were beginning to wither.  I pulled them from the ground and gave them to my hens...a feast of green vines and fruit. 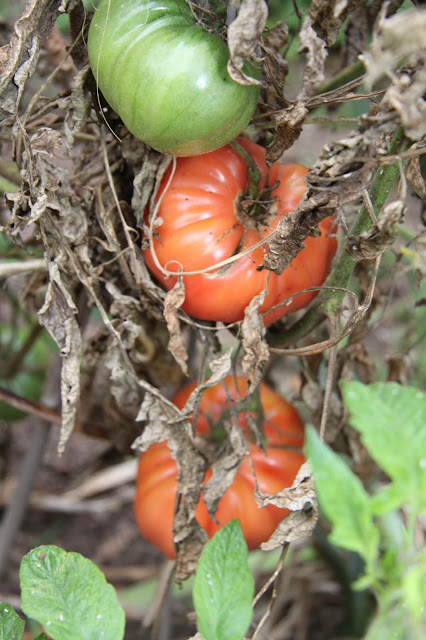 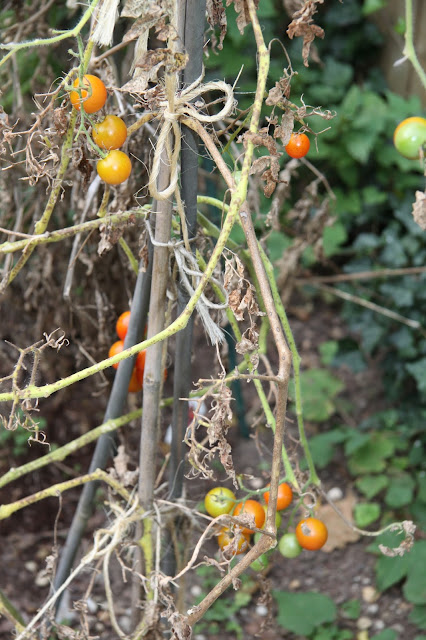 Here they are...some of the last of the harvest. I laid them on the blue table in the potager.  I admired the imperfection of the skins, the diversity of size, color, shape.  I anticipated the flavor within. 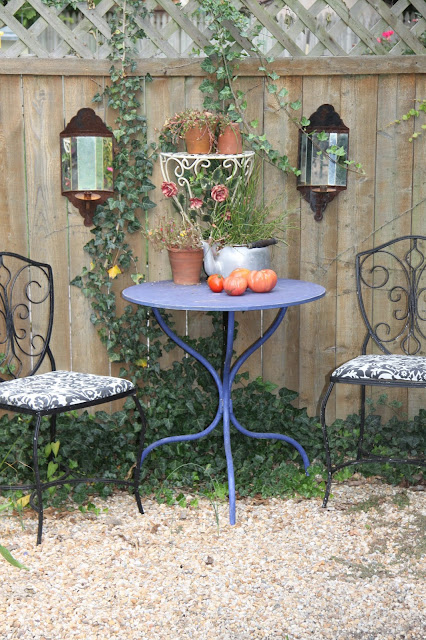 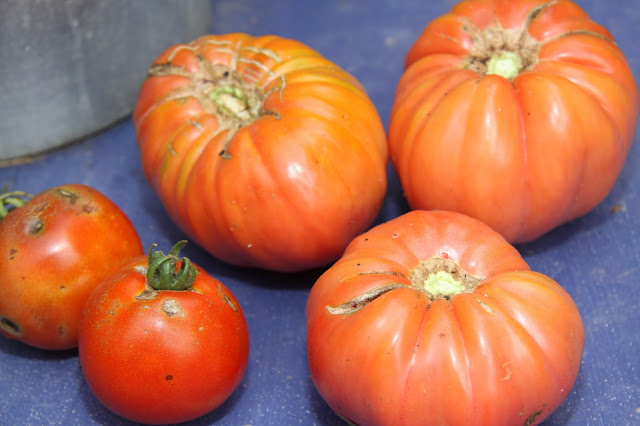 I took some of the tomatoes and I made a simple Tomato Basil soup. Michael took one taste and asked me to double, at least, the number of tomato plants in our garden next year. 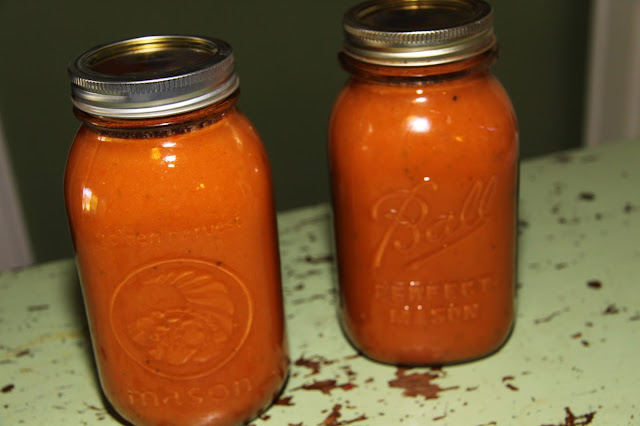 At a party I hosted recently, a good friend offered a beautiful dish starring tomatoes grown in her own garden. 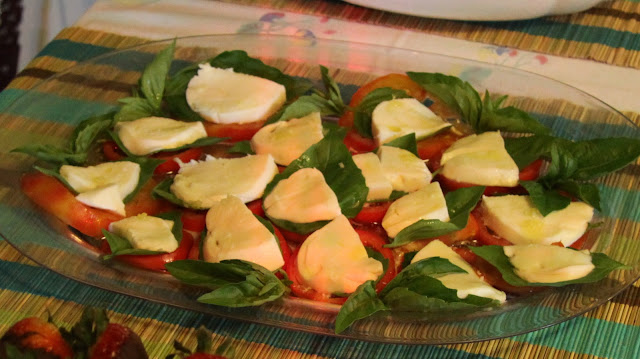 Yes, we Kentuckians are in love with our homegrown tomatoes. But now our growing season has come to an end and we must purchase our tomatoes either in a can or from a grocery or market.  I wonder what kind of cosmic coincidence served to deliver to my email inbox,  on the same day I removed the last of the tomato vines from my garden, an invitation to read a book about the tomato industry, specifically, the Florida winter tomato industry.

I really wish you all would read this book. You can click here to order it from Amazon:  "Tomatoland:  How Modern Industrial Agriculture Destroyed Our Most Alluring Fruit" by Barry Estabrook. ﻿ Or check your local library or bookstore.  In this post, I will quote this book extensively. (If words are italicized, they are directly quoted from the book.)

One thing I did know was that most store bought tomatoes might look pretty but they sure don't taste very good. I didn't give it much thought, other than  frequently refusing tomatoes on my sandwiches and salads at restaurants.

I did not know that Florida growers cannot export any old tomato variety they might choose to plant.  The author explains that "because their coloration and shape don't conform to what the all-powerful Florida Tomato Committee says a tomato should look like...the cartel like Committee...decrees that slicing tomatoes shipped from South Florida in the winter must be flawlessly smooth, evenly round, and of a certain size.  Taste is not a consideration."

I did not know that sandy Florida fields are almost always treated with a chemical called methyl bromide in preparation for planting tomatoes in a process one grower says is "like chemotherapy."  When I googled methyl bromide one of the first sites that popped up was from the Illinois Department of Emergency Preparedness...I noticed the word "bioterrorism" in the url address.  "Banned from most crops, methyl bromide can still be used on strawberries, eggplants, peppers and tomatoes....The fumigant can kill humans after brief exposure in small concentrations.  Sublethal doses cause disruptions in estrogen production, sterility, birth defects, and other reproductive problems."

But that's just the beginning for a Florida tomato plant.  "To combat...pests, a conventional Florida farmer has a fearsome array of more than one hundred chemicals at his disposal....They include carcinogens, chemicals that cause damage to the brain and nervous system...reproductive system...birth defects...chemicals that are so dangerous that even brief exposure can kill a person outright.....An acre of Florida tomatoes gets hit with five times as much fungicide and six times as much pesticide as an acre of California tomatoes."  (Most California tomatoes are grown for canning.)

I didn't know those things specifically but I had a pretty good idea that conventionally grown fruits and vegetables are not very good for you and that organically grown food is safer.  I am ashamed to say that my "splurging" to buy organics was based on a desire to keep my family safe and healthy.  I never gave a thought to those who work and unfortunately, live in toxic clouds of chemicals.  "Workers are exposed to those chemicals on a daily basis.  The toll includes eye and respiratory ailments, ...and babies born with horrendous birth defects."  (And by horrendous, the author means limbless babies...babies born to migrant farm worker mothers who have neither arms nor legs, babies born with no identifiable sex organs, or born missing eyes, ears, a nose, kidneys, an anus.)

But then I read something that I had absolutely no idea about.  "Less than an hour after leaving Naples, {a popular vacation destination for many Kentuckians}...you...enter the city of Immokalee....ground zero for modern-day slavery....any American who has eaten a winter tomato, either purchased at a supermarket or on top of a fast food salad, has eaten a fruit picked by the hand of a slave....That's not an assumption....That is a fact."

The descriptions that followed caused me to weep....inhuman living conditions,  beatings, murders, "workers sold to crew bosses to pay off bogus debts...held in chains, pistol whipped, locked at night into shacks in chain-link enclosures patrolled by armed guards....In this world, slavery is tolerated, or at best ignored.  Labor protections for workers predate the Great Depression.  Child labor and minimum wage laws are flouted.  Basic antitrust measures do not apply.  The most minimal housing standards are not enforced....All of this is happening in plain view, but out of sight, only a half-hour's drive from one of the wealthiest areas in the United States."

And in the end, after all of this death and despair, poverty, misery, murder and enslavement...despite the enormous cost, that tomato DOESN'T EVEN TASTE GOOD.

That tomato is, in fact, often nearly inedible.  But we buy them anyway.  "We buy winter tomatoes, but that doesn't mean we like them.  In survey after survey, fresh tomatoes fall at or near the bottom in rankings of consumer satisfaction...."No consumer tastes a tomato in the grocery store before buying it.  I have not lost one sale due to taste,' one grower said.  'People just want something red to put in their salad.""

As Estabrook states, "Not everyone can grow a garden or head out to a neighborhood farmer's market in search of the ideal tomato."

So what can we do?

There are other alternatives for growing healthy, safe, tasty tomatoes commercially.  The book discusses them and the growers who are making a living in this way, all the while providing safe living and working conditions for their employees and paying a fair wage.  One farm mentioned, Lady Moon Farms, has made a sucess of organic farming in Florida, something most conventional growers would claim impossible. Another farm featured in the book is Eckerton Hill Farm, located outside New York City. This farm supplies many of the gourmet restaurants in NYC.  Eckerton Farm is not organic.  Tim Stark, the owner, says he is not organized enough to keep up with the required governmental paperwork.  However, he has only used fungicides once in fourteen years, to prevent blight from claiming his entire crop, and he applied it to the plants himself.  He does not use chemical fertilizers.  THESE are the types of tomatoes we can buy.

We can be mindful of the taste of the food we eat, and mindful of from where and how that food comes to our table.  As I type this, I am listening to a meditation I am considering offering at a Disciples of Christ sponsored Green Retreat.  In the meditation, the guide instructs me to "feel the joyful pride within you swell, at being a part of loving the earth."

That's what we can do.

As People of Faith or People of Conscience, we can buy our food intentionally and mindfully...and then we can feel the joyful pride within each of us swell...pride at being a part of loving the earth, loving our bodies, and loving our neighbors (the workers and their children who toil in the fields) as ourselves.

We can reject what passes as a tomato on most store shelves today. We can say no to the high price it carries and the philosophy behind it.

Instead, we can embrace the love apple.