I had something written for today but I've just gone to let the chickens out and found one of my hens, a pretty little Rhode Island Red, dead in the coop.

Emmy Lou was the friendliest of all my girls and the one I would most often hand to a curious child who wanted to hold a chicken.

This is me with a teenage Emmy Lou the day she came to live with us. 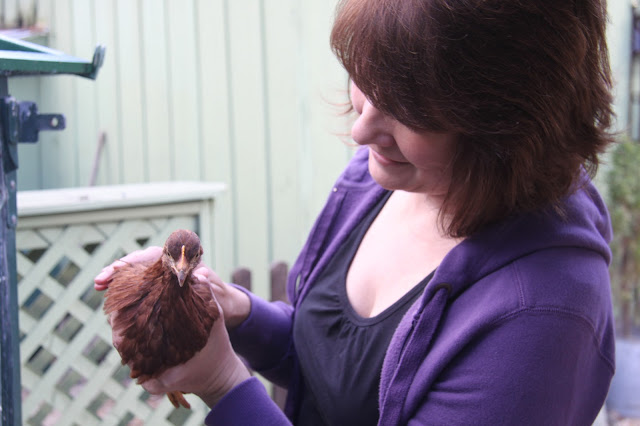 And here's a shot of her on the roost with Nancy. 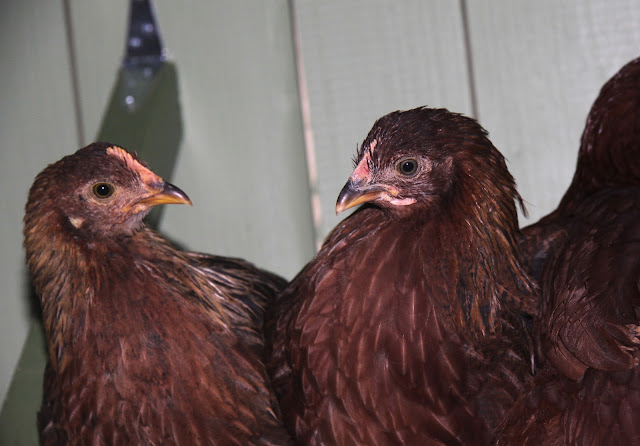 Back when when had six...sunbathing together.  Emmy is right up front. 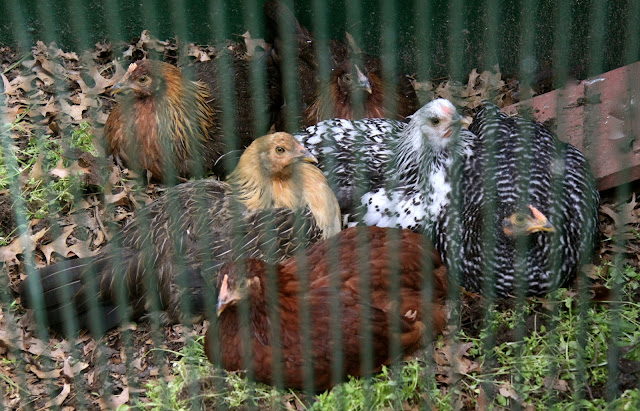 I have been dreading the day that I would find a dead chicken.  Honestly, it made me feel sick to think about it.  It made me feel terribly vulnerable.  My friend has kept chickens longer than I have and she told me that every time one of them dies, she says to herself, "I just can't do this anymore.  No more chickens!"

She also has said to me many times, when wrestling with some difficulty, that she seeks out the calming presence of the chickens.  "What did you do then?" I ask.  "I sat with the chickens."  I do it too.  I call it my chicken meditation.  I have recently made two new friends, both of whom are chicken keepers.  And they report the same sense of peace when they are with their chickens, which seems to be proof that the feelings of vulnerability are worth it, even though it's terribly difficult.

When I was a single girl, I had a sweet little cat I called "Bubba."  He acted a lot like a dog, greeting me at the door.  I LOVED that cat!  When I was very pregnant with Big C, Bubba died.  A neighbor, trying to stop birds from eating his garden up, had put out poison.  It was awful for me and for over a decade I refused to have another animal. I swore I would "NEVER go through that again."  This makes me laugh now...since I was only a couple of weeks from giving birth.  Seriously!

We took in my dad's elderly cat when it needed a home but I refused to get very close to him.  And he wasn't very friendly anyway, so it worked for us both.  It was only because of Little c that we have a dog and two cats now....although the chickens are on me.  Sometimes, in a quiet moment, I marvel at how I have exposed myself to vulnerable feelings by allowing animals in my home again.

Brene Brown has this to say about vulnerability:

"When we lose our tolerance for vulnerability, joy becomes foreboding."

I am certain, for me at least, this is absolutely true.

Sometimes, like this morning, exposing myself in this way sucks.  But most days, it's totally worth it and full of joy.

Maybe I will write a book...."Everything I Needed to Know About Vulnerability, I Learned From a Chicken."
Maybe.